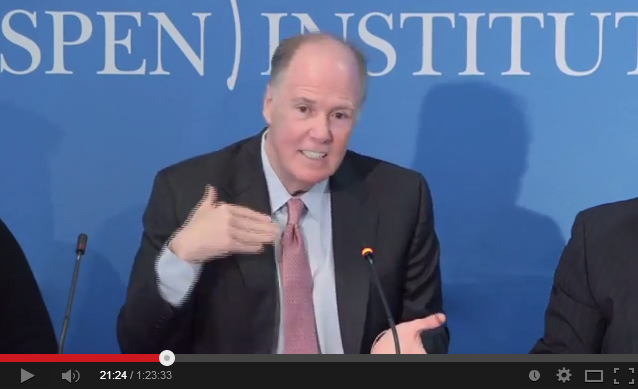 Yesterday, Twitter was abuzz with the news that former Obama national security adviser Thomas E. Donilon said that he “probably would” advise approval of the Keystone XL pipeline due to the energy security benefits it would bring.

But what has received less attention – and is perhaps even more telling –  is what the Washington Post reported in the wake of that news: that “many government officials privately back” Keystone XL.  From the article:

While Donilon’s answer is not entirely surprising – many government officials privately back the project on the grounds that it would expand the oil supply the U.S. would receive from a trusted ally, as well as bolster our relationship with Canada more broadly – it does shed light on how some people within the administration view the issue. Equally important, Donilon has spoken during his time at the White House about the importance of addressing climate change, so this is not a comment coming from someone who is indifferent about the issue of global warming.

Two things here: that the Washington Post is not surprised by Donilon’s comments is important because it suggests that the support of those officials who “privately back the project” is pretty extensive.  Second, that support for Keystone XL comes from an official who is not “indifferent about the issue of global warming” further marginalizes Keystone XL opponents who contend (wrongly) that the pipeline would be “game over” for the planet.

Of course, Donilon’s comments are in right in line with those of General Jim Jones, another former Obama national security advisor who has strongly backed Keystone XL.  As he has said, “The country can’t afford to pass up the opportunity for reliable supply from a close ally and neighbor, which would leave us less vulnerable.”

And interestingly, this news has come to light in the same week that Jack Gerard, President of the American Petroleum Institute (API), put Keystone XL front and center during his State of American Energy speech, and Tom Donohue, President of the U.S. Chamber of Commerce, said that building Keystone XL is one of the top priorities for 2014.

So not only do “many government officials,” two former national security advisors, key figures in industry, labor and business groups, and a clear majority of the American people all support Keystone XL, every environmental impact statement has found that Keystone XL will have no significant impact on greenhouse gas emissions.  It could not be clearer that Keystone XL is in the nation’s interest, so what’s the holdup again?