Five Year Anniversary: List of Reasons to Build Keystone XL is “Now Nearly as Long as the Pipeline Itself” 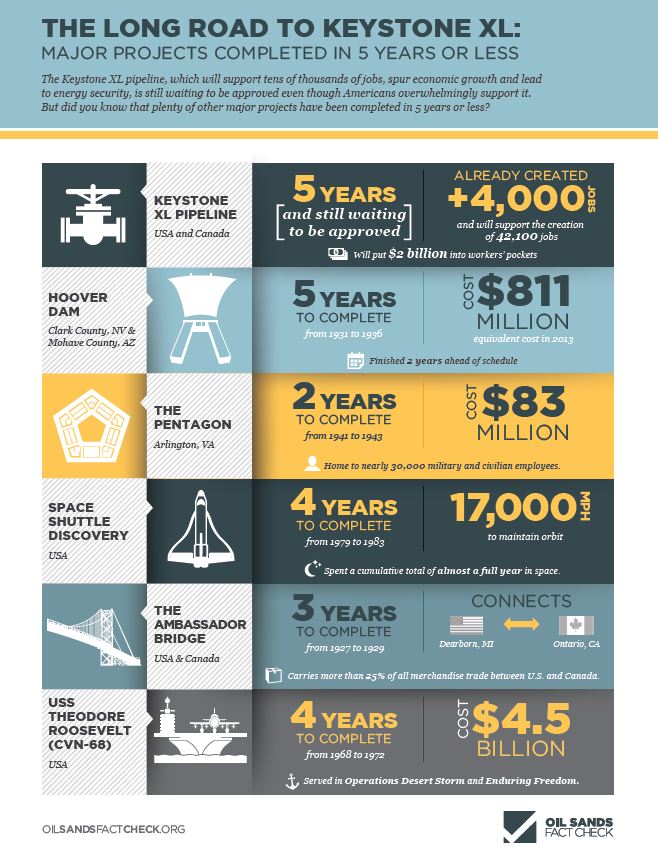 Five years ago today, TransCanada submitted its application to build the full Keystone XL pipeline. Normally anniversaries are a cause for celebration, but this is an anniversary that marks the delay of major benefits to the American people: it’s a delay of thousands of good paying jobs, economic growth, and enhanced energy security.

To highlight just how long the Obama administration has delayed a decision on this project, Oil Sands Fact Check (OSFC) is releasing a new infographic, which points to several projects on a massive scale that have been completed in less than that time frame.  These include: the Hoover Dam, the Pentagon, Space Shuttle Discovery, the Ambassador Bridge, and the USS Theodore Roosevelt.

The list of reasons to build Keystone XL is, as Senator Landrieu (D-LA) rightly put it, “as long as the pipeline itself.”  A recent OSFC’s latest pamphlet, “Why Americans Say Yes to Keystone XL,” presents this “miles-long” list of reasons for approval, which include the fact that Keystone XL will meet President Obama’s climate standard, increase energy security, create thousands of jobs, goes above and beyond the safety standards of any existing pipeline – and Canada will develop its oil sands regardless.

It’s no wonder that there is such overwhelming public support for Keystone XL across the country. Over the past year, union and labor groups have rallied just steps from the White House and in cities throughout America. A clear majority of editorial boards support the project. Even Democrats and Republicans in Congress agree that Keystone XL is in our nation’s best interest – yet the wait drags on.

Senator Mary Landrieu (D-LA): “The time for studying is over. It’s time to start building this important pipeline. And the list of reasons to build it is now nearly as long as the pipeline itself […] If we continue to delay, it will drive Canadian production to be exported to China and Korea, and we will miss out on 43,000 much-needed jobs.”

Senator Max Baucus (D-MT): “We cannot sit by while excuse after excuse delays jobs in Montana and across the country,” said Baucus. “We’ve had years of studies and the president’s own State Department has repeatedly concluded the environment won’t be harmed. It’s past time to put Americans to work building the Keystone pipeline.”

Senator Mark Begich (D-AK): “I am somewhat perplexed by the administration’s delay after delay after delay and arguments why somehow something else can’t happen. In reality, this project is a good project, a good jobs project, and it has a lot of opportunity not only for us here in the United States, in the sense of the lower 48—where I am standing today in this Chamber—but for Alaskans too.

Heidi Heitkamp (D-ND): “We have been waiting 5 years. We fought a world war and defeated the Nazis in less time than we have been waiting to have a determination on the Keystone Pipeline […] when we look at it, overwhelmingly the building of the Keystone Pipeline is supported by the American people. Why is that? Because it is good for our national security, and I think we heard how good it is for employment and job opportunities.”