“The fact that McKibben and his organization have made the proposed pipeline the bête noire of the entire environmental movement—and the litmus test by which they vow to judge President Obama’s integrity on the environment—seems arbitrary.” – BusinessWeek 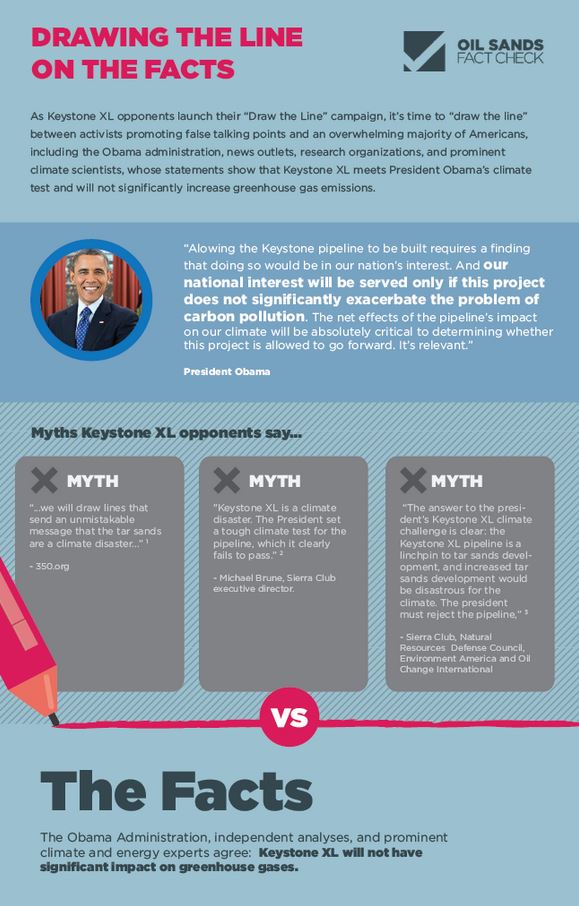 Ever since President Obama said that approval of Keystone XL hinges on a finding that the project “does not significantly exacerbate the problem of carbon pollution,” Keystone XL opponents have been trying to convince Americans that it will, but have failed miserably. The consensus is clear: Keystone XL passes President Obama’s climate test.

Today, before Keystone XL opponents begin their “Draw the Line” campaign, Oil Sands Fact Check (OSFC) is releasing a new infographic that “draws the line” between activists promoting false talking points and an overwhelming majority of Americans, which include the Obama administration, news outlets, research organizations, and prominent climate scientists, who have all agreed that Keystone XL will not significantly increase greenhouse gas emissions.

Even the event organizers admit, “The fight over Keystone XL isn’t about oil. It’s about justice.” Yet as our OSFC’s pamphlet, “Why Americans Say Yes to Keystone XL,” demonstrates, Americans overwhelmingly support Keystone XL because the pipeline will increase energy security and create thousands of jobs, while going above and beyond the safety standards of any existing pipeline. No wonder union and labor groups have rallied in support of Keystone XL at the White House and in cities throughout America and a clear majority of editorial boards support the project. Even Democrats and Republicans in Congress agree that Keystone XL is in our nation’s best interest.

As you will see from the statements below, the only ones saying that Keystone XL doesn’t meet President Obama’s climate test are the activists themselves.  Gee, whom to believe?