U.S. Crude Oil Stays in the United States. According to the U.S. Energy Information Administration (EIA), in 2011, 99.7 percent of the crude oil produced in (or imported into) the United States was also consumed here, which means less than one-half of one percent (0.3 percent) was exported. Simply put, the United States does not export crude oil in any significant way. 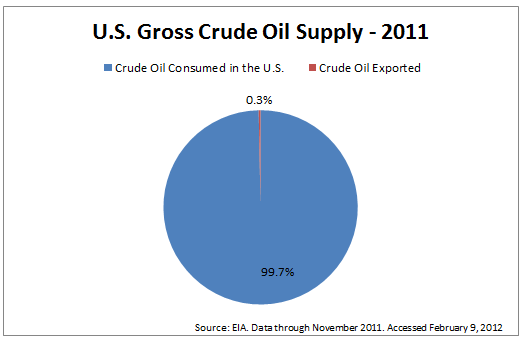 No Reason to Export Heavy Oil. The U.S. Department of Energy (DOE), in reviewing the Keystone XL project, concluded that “there would be no economic incentive to ship Canadian oil sands [crude] to Asia via Port Arthur” without a surplus of heavy oil. And since heavy oil imports are declining (DOE noted that heavy oil imports “are likely to decrease by a significant amount within the next five years”), oil sands crude from Canada would be filling a gap, not creating excess supply.