No More Excuses on Keystone XL

In response to a question about the Keystone XL pipeline back in January, White House Press Secretary Jay Carney told reporters: “[I]t is a fallacy to suggest that the president should sign into law something when there isn’t even an alternate route identified in Nebraska …” Carney also said the then-delay in reviewing the project was “a result of concerns in Nebraska about the route … and how it would affect the aquifer there.”

That was then. Now it appears the White House statements were really excuses, not concerns.

Indeed, last year the State Department’s exhaustive Keystone XL environmental review concluded that the project would be the safest pipeline ever built in the United States. The department also determined that the project’s proposed safety mechanisms and procedures would protect the Ogallala Aquifer.

Unfortunately, concerns in Nebraska handed the administration an excuse for more delay. Pipeline builder TransCanada responded by working on a relatively small detour to avoid Nebraska’s sensitive Sand Hills region, which was unveiled this week: 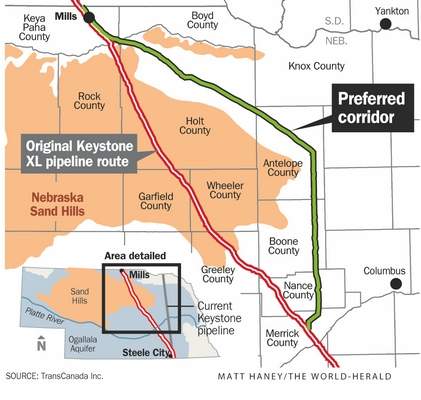 This followed the Nebraska legislature’s approval of a bill to allow the state to move forward with a new Keystone XL route, on a 44-5 vote that was pretty much a slam dunk. Gov. Dave Heineman, who had voiced concerns about the original route, promptly signed the measure into law. This welcome news means the last major objection to Keystone XL has been resolved. Consider:

With this pipeline we can have a healthy environment and a growing economy. We can strengthen our important energy relationship with Canada and help make our energy future more secure. The environmental impacts of building the Keystone XL will be minimal, while the benefits – in terms of jobs, economic growth, and energy security – will be enormous.

Politicians are known as masters at creating excuses, but when it comes to the Keystone XL pipeline, there are simply no excuses left for keeping it on hold.